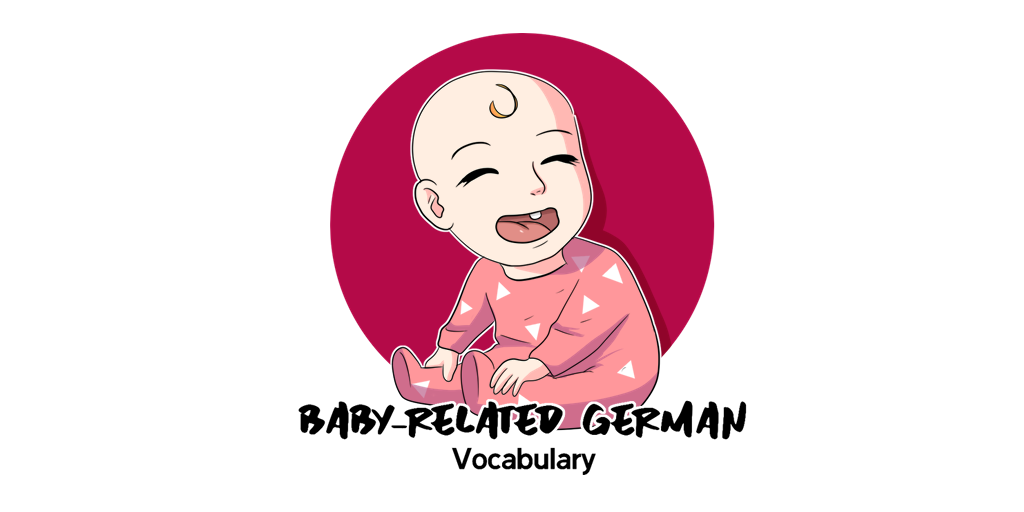 If you’re moving to a German-speaking country and raising (or planning to raise) a bilingual child, you’ll probably want to talk to them in German. You might do babysitting for German children or spend time with their parents.

You don’t have to be a parent to be interested in baby-related German vocab. Whatever the reason for your interest, it’s essential to find materials that will help you learn how to speak to children in German.

In this article, you’ll find lots of Kindersprache (child language or child talk) that will be very useful in interacting with or raising bilingual or entirely German-speaking children.

The topics here include baby talk, basic baby and pregnancy vocab, and funny, popular baby-related phrases. Fun songs for kids, child-friendly German movies, and cartoon shows follow. It doesn’t matter if your child is school age, a toddler, or a newborn baby: we have lots of fun things in store for you.

Doubled syllables are really common in German baby talk. This frequently indicates words used with babies or simply childish words. They are used because they are simple and babies can grasp them. Examples include wehweh (from Weh – pain, hurt), Mama, and Papa. Others are:

There are actually lots of German language learners who plan to give birth in Germany, so they (and many others) will find this list of sometimes quirky pregnancy vocab helpful.

This section will include the translations of “to have a bun in the oven” and phrases for the most common child and baby-related activities that people perform.

Einen Braten in der Röhre haben (literally to have a roast in the oven) is the German equivalent of to have a bun in the oven. New parents are called frischgebackene Eltern (literally freshly-baked parents).

Now that you know the words for basic necessities and how to talk to little ones in German, let’s go one step further. You can play and sing these songs for and with children. They are good for language learners too. 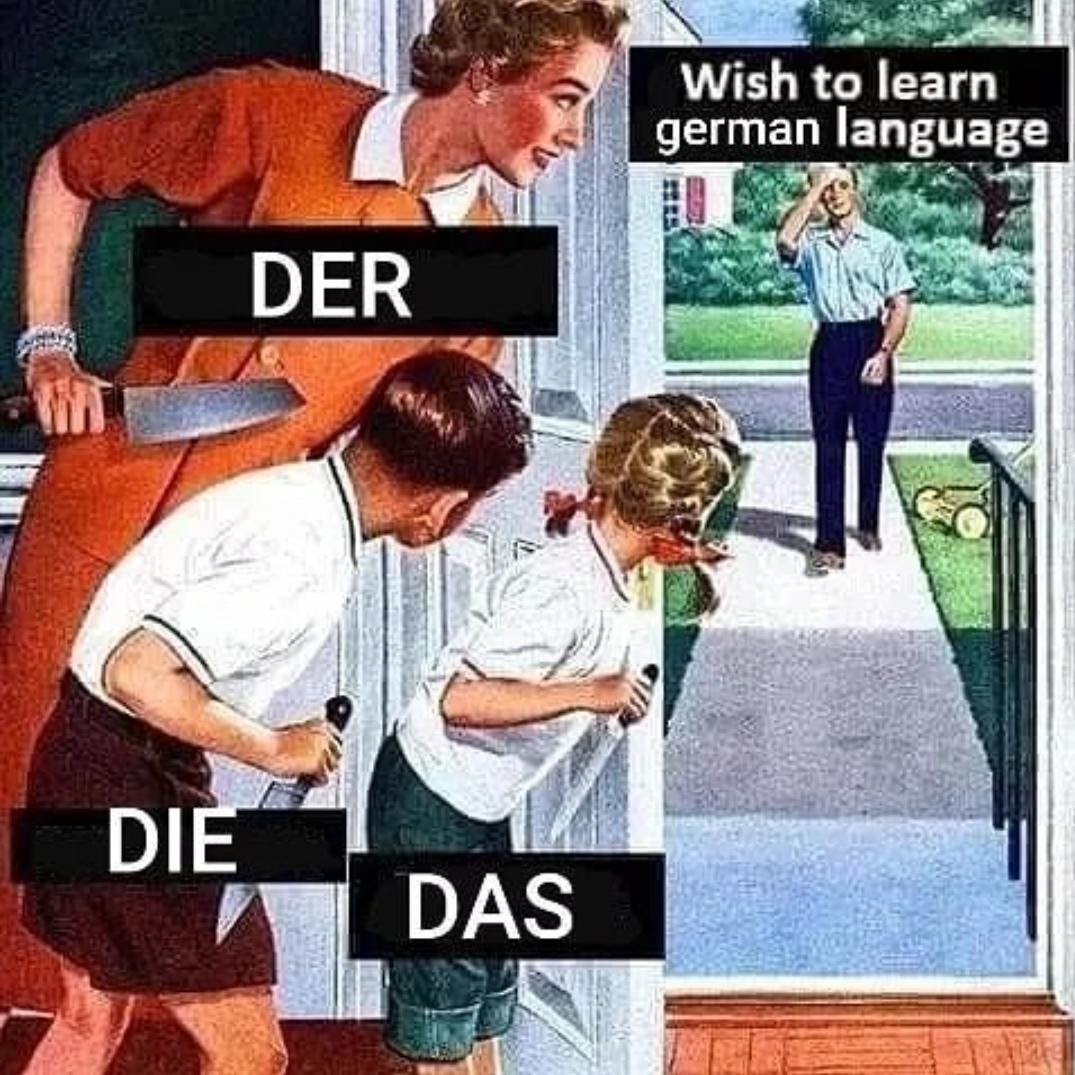 The title of this song shouldn’t cause anxiety even after seeing the meme. You’ll hear it on Sesamstraße, which is – you guessed it - the German version of Sesame Street.

The song’s message is that instead of stifling your curiosity and staying confused, you must ask questions (“wer nicht fragt, bleibt dumm“ – they who don’t ask stay stupid).

The three main definite articles are rhymed with “wer, wie, was” (who, how, what), three important question words. The song also introduces “warum, wieso, and weshalb,” which are all variations on the word “why.” Listen to the song here.

We move on to another popular song for kids, which is called “All the birds are already there.” The rhymes are easy to follow and singing along with a child is lots of fun.

All the birds are already there
alle Vögel, alle!

It comes with songs and sounds.

This song is not only fun to listen to, but it will also help you remember basic food words.

If you want to bake a fine cake,
der muss haben 7 Sachen:

Push it into the oven.

Listen to the song here.

Our last choice is dedicated to the Butzemann or Boogeyman in English. The song presents the fodder of childhood nightmares as a mischievous, fun-loving spirit in the home. How soothing.

Listen to the song here.

A lot of families experience new cultures by watching movies. It’s a great way to introduce young ones to concepts beyond what they see daily.

Stella and the Star of the Orient

Stella steps into what she believes is an ordinary closet while rummaging in the attic and travels a century back in time. She meets her great-grandmother, who helps her solve a family mystery. This magical, sweet film is suitable for children 6 and older.

Emil and the Detectives

Twelve-year-old Emil’s money is stolen while he’s traveling to Berlin. He and his newfound friends decide they will catch the thief. For ages 8+.

Musically gifted, blind teenagers help a runaway find his way back home to Kazakhstan. It is an exciting story not without elements of romance. The main character, Herbert, and his friends form a band and even get to be on TV. For ages 10+.

Our recommendations are all original German productions. It’s regrettable that so many cartoons on German TV are dubbed versions of US programs.

Lauras Stern is the story of a little girl who discovers a wounded star, which she decides to keep and take care of. They go on an exciting, adventure-filled journey together. Each of the 52 episodes is about ten minutes long. You can watch one of them here.

Käptn Blaubär is based on the comics by Walter Moers and tells the adventures of Captain Bluebear during his journeys across the Seven Seas. A little story frames each episode, in which the bear talks to his grandchildren. The seafarer’s tales are often hilarious. An animated cartoon at the center depicts them. Watch it on YouTube (playlist).

Biene Maja tells the tale of this little honey bee, her friend the grasshopper Flip, and other characters. The cartoon series originally ran in the 70s and was remade in 3D in 2013. You can watch it on YouTube (3D). The original is available here.

The “Ottifant” is a play on words combining “elephant” and Otto. Otto Waalkes was the German comedian who created the cartoon. The TV series tells the story of an Ottifant family, from Opa Bommel to Baby Bruno. Watch the 13 episodes on YouTube.

Wickie and the Strong Men

In Wickie und die starken Männer, Wickie is a Viking boy who lives in a small village with his parents. He’s a bit of a weakling and somewhat fearful, making him a rather untypical Viking.

However, he is exceptionally bright and his remarkable intelligence helps him find the answer to some very difficult problems in and around the village. The cartoon is on YouTube (original). Alternatively, you can watch it here in 3D.

Are there any other topics about children that you would have liked to read about? Let us know in the comments. Don’t forget to share this article with any friends and family members who could benefit from it. Danke schön.