Do’s and Don’ts for People Travelling to Germany 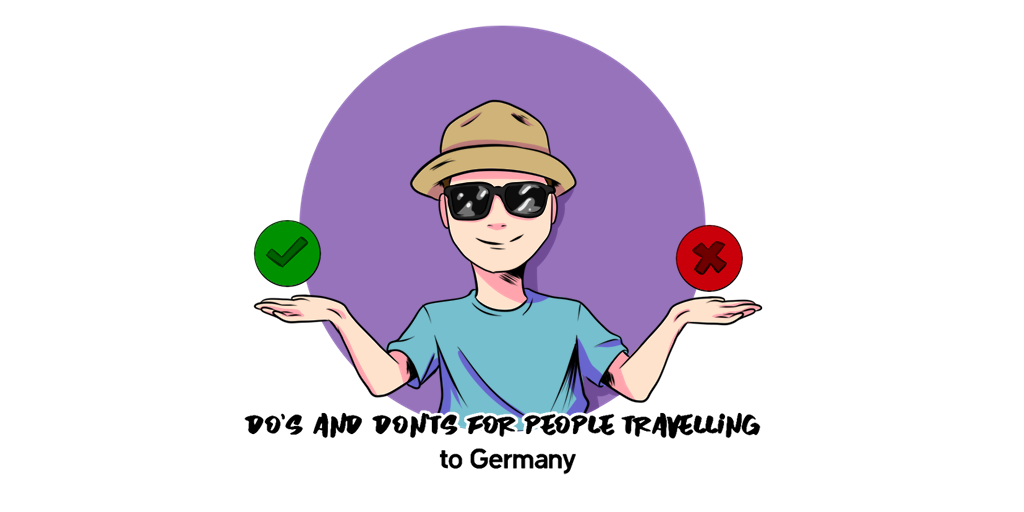 Quick Navigation
Do be on Time
Do Share Rides
Do Bring Enough Cash
Do Make Eye Contact When Raising Your Glass
Do Buy a Transport Card
Do try German Bread and Beer
Don’t Call After 20:00
Don’t Ignore Recycling Rules
Don’t Make Noise Whenever You Feel Like It
Never Walk in the Cycling Lane
Don’t Talk or Even Mention the Third Reich

Germany is still one of the world’s biggest machinery and car manufacturers, offering travelers a unique cultural and historic experience. Its old timber houses, beer, delectable bread, gorgeous castles, and Baroque buildings are nothing short of enthralling.

The country has its own set of customs just like any other country in the world. While some of them vary by region, some etiquette is standard nationwide.

Germans place great value on upholding them. Keep the following do’s and don’ts in mind if you’re planning a trip to the heart of Europe in the future. They will earn you the respect and perhaps even friendship of locals.

Do be on Time

Being on time means being early in Germany – there’s no harm in sich verfrühen here. The concept of being fashionable late is frowned upon. It wouldn’t be an exaggeration to say dates, timetables, appointments, and deadlines have the weight of a solemn oath in this country.

Being late is equivalent to contract breach. If it happens, you need to call to warn people in advance and have a good excuse.

Cabs are a bit pricey in Germany. The minimum fare is EUR 5.00 even if you’re taking the cab to somewhere within walking distance, which you might be doing if you overindulged in the local beer. It’s best to avoid taxis outright if you’re on a shoestring budget.

Share rides if taking a cab is your only option. There are many ridesharing options here irrespective of distance. In very small towns or villages, there probably won’t be any Uber. You’ll have to make do with buses and cabs. One alternative is car rental.

Unlike the US, cards aren’t accepted everywhere. What’s more, there might not be an ATM in sight. If it is, it might not be your issuing bank’s and you’ll pay upwards of 5 euros as a withdrawal fee. It really is best to have cash on you everywhere you go.

In addition, Germans themselves prefer paying cash because it’s easier for them to monitor how much they spend this way. It must work because Germans are very savvy when it comes to finances. Their level of debt is extremely low compared to that of Americans and most other European nations.

To make a long story short, the restaurant of your choice might not accept cards, so always have Euros on you to avoid inconvenience.

Admittedly, a lot of countries have this custom, but in very few is it such a big deal when you don’t make eye contact during a toast. It’s considered disrespectful. Some Germans also believe you will be unlucky in love if you don’t look someone in the eye when raising your glass.

Do Buy a Transport Card

Germany was one of the first countries to have a very well-developed public transport network. There is a myriad of bus and subway lines in most towns and cities.

For instance Bonn, a city of fewer than 350,000 people, has around 15 subway lines. A 2 or 3-day pass will allow you to use any bus or train for free and for as long as you like.

If you’d rather buy tickets, make sure you always stamp them. You’ll find subways don’t have ticket sellers and transport inspectors (Kontrolleure) are a rarity.

Still, you don’t want to be caught and fined, which can happen because people are tempted to save some cash and use public transport for free. Tickets are purchased from machines and they’re more expensive than cards.

Do try German Bread and Beer

Hundreds of types of bread in all sizes and shapes are produced in Germany. This is a staple food and an important part of the country’s culture. It’s freshly baked daily and smells delightful.

More than 5,000 beer brands are produced in Germany’s (about) 1,400 breweries. Sorts include Hellbier, Kölsch beer (popular around Cologne and Bonn), Altbier, and Weißbier. If you don’t try German beer and bread, it’s like you never went to Germany.

It’s rude to call someone after 8 pm unless you’re really close. This is considered a disturbance of their evening routine, which usually revolves around dinner and Tatort, the German version of CSI.

The main sports news is on from 6 and 7 pm on Saturday, making this the worst interval for calls. Lively comments on social networks accompany the head sports emission. Predictably, messages on Facebook, WhatsApp, and Instagram are tolerable at all hours.

Germany was one of the first European countries to adopt strict recycling rules, and waste separation rules remain in full force to this day. It is a mortal sin to dispose of organic waste in the bin for recyclables and vice versa.

At first, you won’t have any idea of what goes where. There are tens of bins in all different colors on most street corners. They are also locked. You won’t have the key.

The best way is to just ask a local for guidelines on waste separation and recycling. Germans are unforgiving of mistakes because they want to retain their status of the top-ranked recycler worldwide.

There is a monetary deposit for aluminum cans, glass bottles, and plastic bottles on top of their prices. When you return to cans or bottles, you get your deposit back at the supermarket.

If you have a lot of bottles, this might be a pretty penny. If that’s not enough to motivate you, expect to be frowned at or even reprimanded by locals if you throw cans or bottles in the trash instead of returning them to their rightful place.

If you believe noise means life, you might not be happy when you visit Germany. Noise has fixed hours here. You can’t partake in home improvement, mow your lawn, or play loud music between 10 pm and 7 am or around noon.

Public holidays and Sundays are off limits too. Children can’t be expected to be quiet all the time, so children making noise is an exception.

Never Walk in the Cycling Lane

Germans’ proverbial affinity for order is no secret to anyone. Like many other countries, they have specific lanes for pedestrians and for cyclists.

Unlike many other countries, the consequences of cycling in the pedestrian lane or walking in the cycling lane can be costly. You’ll receive an unfriendly, even an angry reaction, including cursing or yelling against the background of a fiercely ringing bicycle bell.

Don’t Talk or Even Mention the Third Reich

Not even as a joke. There is a neo-Nazi underground scene here like everywhere else, but anything to do with the Third Reich and Hitler is off limits outside of it.

There you have it! What do you think should we add to this list? Sound off in the comments!