German TV Shows for All Levels 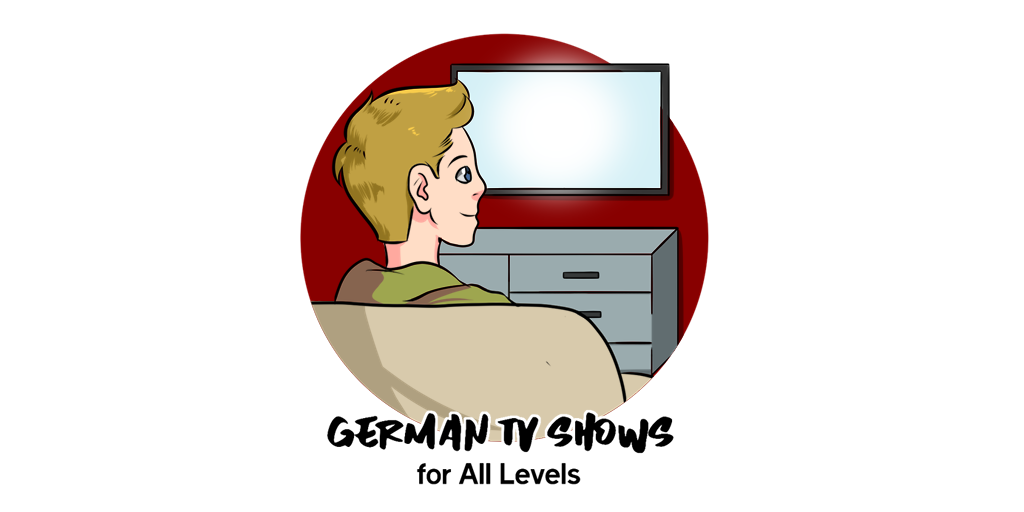 To learn German from TV shows, no background knowledge is necessary. We’ve compiled these shows and divided them by level for you to enjoy.

Many of them provide vocabulary lists, exercises, and other useful resources to improve comprehension. They’re all available on TV and on YouTube unless otherwise indicated.

Our list begins with Extra auf Deutsch, an educational series filmed in multiple languages. There are 13 episodes in the German version with A1 vocabulary. Only basic knowledge of the language is needed for you to enjoy this show.

Not unlike a sitcom, three young people live as roommates in this show. When the linguistically inept Sam enters the picture, the trouble begins.

This show will teach you lots about German culture and even more about common expressions and everyday use of the language.

This YouTube series is a great place to start if you’re just beginning with German. There are hundreds of episodes to help you improve your grammar, spelling, pronunciation, and reading comprehension. You’ll find a new video every Sundays.

Each animated episode includes short, easy to comprehend dialogues and is about 10 minutes long. When in doubt, simply set the available English subtitles. Each video comes with a multiple-choice test to help you check your progress. You will see the answers at the end of each episode.

Nico’s Weg is available on Deutsche Welle. The show teaches viewers basic vocabulary for day to day life, which can be reviewed at any time. There is a vocab list, grammar explanation, exercises, and a transcript for each episode. Nico is a guy who’s arrived from Spain.

When he arrives in Germany, he loses all of his things. He tries to find them and to get to his aunt's house. Thankfully for him, he meets friendly locals along the way (Weg in German) who help him out.

Like most of the shows on this list, Easy German can also be viewed on YouTube. The series offers new episodes featuring native speakers every Sunday and Wednesday. Subjects include dialects, grammar, regional peculiarities, and culture.

You’ll pick up new words quickly because both German and English subtitles run at the bottom of the screen.

Most of the episodes start with a discussion topic or question. Hosts then go out in the street and talk to random locals about them. A typical question might be what someone’s dream job is.

Available from the Goethe Institut, First Steps (erste Wege in German) covers everyday phrases and words, especially for people traveling to Goethe’s homeland. Viewers learn new ways to express themselves at locations such as the bus station or doctor's office.

Other episodes explain how to look for an apartment, conclude a phone contract, and talk to German people whom you just met.

Each component has comprehension exercises. If you have a hard time understanding, you can turn the subtitles on. Alternatively, all video transcripts are available for downloading.

This series is particularly recommendable because it also teaches basic skills people require if they’re planning to moving to Germany.

Verbotene Liebe (English: Forbidden Love) is a soap opera featuring easy to understand dialogues. The sentences are short and simple. The early episodes only require very basic knowledge of the language. As the series moves on, more complex sentence structures appear.

The plot evolves around a couple that falls in love despite their parents’ objections. They come from different echelons of society. Later, it emerges there are other, more controversial reasons forbidding their love.

As its name might suggest, Germany from Above offers a bird’s eye view of the country’s best-known cities. The documentary teaches us to use prepositions correctly, which is a highly-demanded competence by anyone’s standards.  If you’ve wanted to beef up on nature-related vocab, look no further.

Beginners won’t know many of the words used. However, the simple sentence structure and grammar make up for it. You can look up new words because each episode has subtitles. This won’t always be necessary though. Visual cues are available for many of the unfamiliar words.

Available on ARD, der Tatortreiniger is a dark comedy about a crime scene cleaner. That’s the translation of the title, from Tatort – crime scene and Reiniger – cleaner (reinigen – to clean). If twisted humor is what you’re after, this is the show for you. The main character, Heiko, communicates with the deceased’s relatives.

He has a north German accent that you’ll quickly become familiar with. The other actors all have different accents as he meets people from across the country.

Babylon Berlin is a historical drama series taking place during the days of the Weimar Republic, one of the most difficult periods in German history. A police commissioner transfers from Cologne to Berlin, where there has been an underground crime boom in the wake of WWI.

The series depicts the conditions which made the rise of the Third Reich possible, refreshingly untouched by US propaganda.

Our list of shows for advanced learners starts with Tatort, a word we mentioned earlier. You can see it on TV or on YouTube. The setting of Germany's longest-running, most popular crime drama series alternates between Swiss, Austrian, and German cities.

There’s no greater joy to a fan of the show than when it comes to his or her hometown. Some of the most famous actors in Germany are on it, and the cast always changes. Viewers get exposure to a wide variety of dialects and become familiar with German cities.

The show features new and interesting vocabulary related to tolerance, corruption, extremism, and other social issues relevant to the respective region.

On Doctor’s Diary Gretchen, a German doctor looks for love. She’s equally inept in love as she is in life in generally. The show is chock full of fumbling and mishap. It’s funny and romantic, but it can be traumatic too on occasion.

On Dark (German: Dunkel), two children disappear in a cave near a fictional town. There are German and English versions of the science-fiction thriller on Netflix.

The original language of the series was German. The actors speak easy to understand Hochdeutsch on the show, but you’ll learn common words and colloquial expressions as well.

You’ll find these quite useful in everyday life and conversations. You’re sure to improve your vocab and grammar skills with the help of this exciting series.