The Sweetest German Terms of Endearment to Call Your Loved Ones

The German language is rarely accused of being a language of love and romance. I wrote this article in an attempt to change the perception of it in this regard and give it its due. It can sound harsh, but it can be very gentle and loving.

Like English, it is full of terms of endearment – words that express affection toward a loved one, be they a family member, friend, or romantic partner.

I'll list some of the more interesting and common terms of endearment from the German language and its dialects. 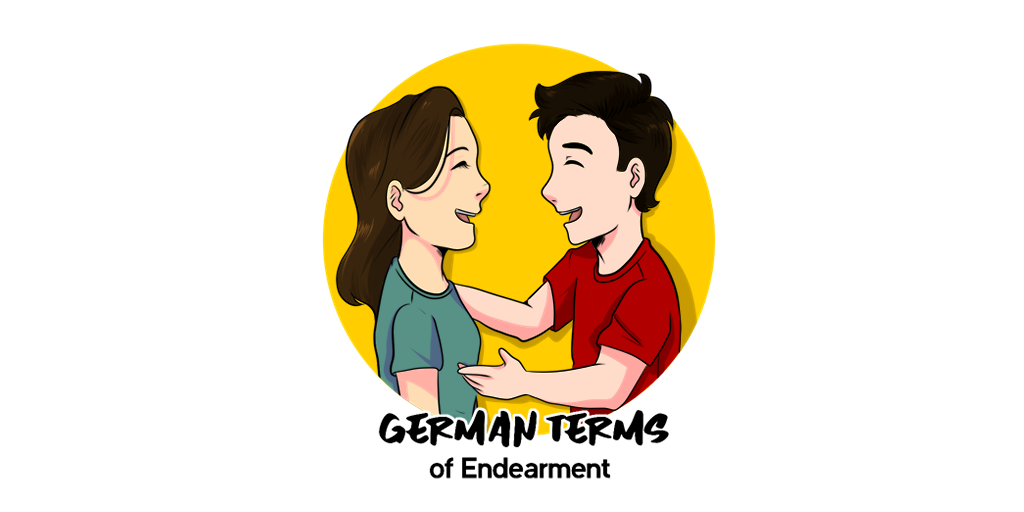 You can use the following words to address anyone. They are the most popular terms of endearment.

Schatz and its variations, Schätzchen and Schatzi (“little treasure”) is the most common term of endearment in German by far. It is capitalized like all German nouns. Almost all German-speaking couples call each other this, and it’s also commonly used with children. Normally, you’ll hear it reverberate across playgrounds.

Liebling is literally translated as “favorite”, but it means “dear” or “darling” if you address someone. As you probably know Liebe, the first part of the word, means “love”.

Another use of the word is as a prefix. For example, “mein Lieblingslied” means my favorite song. It can be added to any noun to express something is your favorite in that category of words.

You can use Bärchen, the diminutive of bear, to address a spouse, boyfriend, girlfriend, or child. It is also very commonly used by people in same-sex relationships. See our explanation of the diminutive at the end of this article.

While Bärchen is also among the five most popular terms of endearment, its non-diminutive form bear (Bär) is not. Germans must not see bears as cute and cuddly.

In German, süß is an adjective meaning “sweet”. You can use it as a noun to address a loved one. In this case, it becomes capitalized and is inflected for gender. If you’re addressing a man, it should be Süßer, for example mein Süßer – my sweet (man). A woman would be meine Süße.

There are very few, if any, terms of endearment used exclusively toward men. This is a reflection of the culture, which equates masculinity with strength and resilience, not softness and gentleness.

German men often turn to their female partners using Maus or Mausi. You can also use it for a child, in which case Mäuschen, the diminutive, is more common. Maus is in the top ten of German terms of endearment.

Engel is a popular term for women, but it’s also used between males in same-sex relationships.

The bunny is a cute animal in all cultures and in every language and German is no exception. While you can address a man using it, it’s more popular for women. People also use the diminutive form of Häschen.

Most German terms of endearment fall into one of three categories: cute animals, sugary foods, or valuable objects. The second-most popular in the third one (after Schatz) is Perle.

Popular terms of endearment for children are mostly limited to cute animals.

My first choice, Schnucki, has no literal translation in English. It is similar to “sweetie” or “sweetie-pie.” It is most common for children, but you can address a partner using it too. It is one of the ten most popular German terms of endearment.

Schnecke and Biene are in the cute animal category. Notice how animal terms can combine. Both bears and mice are cute and together, as in “mouse bear”, they are twice as cute.

Compound Words of Endearment in German

German is famous, or should I say “infamous”, for its tendency to string words together into compound nouns. That’s why we have such long nouns. It is no accident that Rindfleischetikettierungsüberwachungsaufgabenübertragungsgesetz, the longest word ever to exist in a human language, is German. This is not a term of endearment, but a law on beef labeling. What’s more, it was in use until recently, when the law was repealed.

Our final section on types of terms of endearment is dedicated to compound nouns used to address loved ones.

The first part of this term means “cuddle”. It can be attached to other terms as well. For example, there is Knuddelmaus (“cuddle mouse”).

This one isn’t all that common, but I’ve included it to give you an idea of the creativity, scope, and weirdness of German terms of endearment.

Cute, cuddly animals like Bär and Maus can be attached to other words, such as the diminutive of Zahn (tooth), which is Zähnchen, translating as “little tooth.” Why would you call someone a Mausezähnchen or “little mouse tooth”? We don’t know, but imagine how cute and small the object must be.

Schnuckel is slang for a young and attractive gay man, while Schnecke means “snail”. Schnecke shows up in lots of German endearment terms, but few English ones. The translation for this term would be something like a bite-sized snail.

While only remotely related to the primary meaning of the first noun, this compound noun is a common term of endearment in same sex relationships.

Fürzchen is the diminutive of Furz or “fart”. Of course, the bunny is right up there with the rest of the cute animals, prominently featured in German terms of endearment.

Knutschkugel is not only a term of endearment. They also call small, round two-seat cars that.

If you’re looking to express sweetness, you know you have quite a few options in German. This one takes the cake, pun intended! Alternatively, you could use Honigbär (honey bear) or Zuckermaus (sugar mouse).

Moppel is like “little pudge”, a small and fat person, and it’s not a nice thing to be called. Its diminutive form is more endearing. Of course, it depends on the tone of voice.

The second term is a combination of a bedtime story, a lullaby, and an endearing word.

Most German terms of endearment are suitable for partners as well as children. However, there are some that are suited to one and not the other. Observe differences to avoid awkward situations. You don’t want to call a new boyfriend by a pet name his aunt would have used when he was a child.

Since many German terms of endearment come from animals, now is the time to get away with calling someone a “magic mouse”.

As you’ve noticed, a lot of these terms involve diminutive forms of regular words, like Bär (bear) and Bärchen (little bear) or Maus and Mauslein (little mouse). You form the diminutive by adding -chen, -i, or -lein. Diminutive nouns take the definite pronoun das as they are always neuter.

Is there any difference in meaning between -chen, -i, and -lein? Not really. The first one is most common. Note that the original non-diminutive noun doesn’t have to be neuter itself. It is die Maus and bear is masculine.

Normally, you add an umlaut to the new word. Das Hündchen (the little dog) is the diminutive of der Hund (the dog).

You can also use the diminutive form of a person's name to express fondness. Like we have Sam - Sammy or John – Johnny in English, Hans could be referred to as Hänschen.

Admittedly, this is true for any language, but “love” is a very strong word in German. Germans aren’t ones to throw “love” around. To express the stage between loving and liking someone in German, you must say “Ich habe dich lieb” or I like you a lot. This is the less intense variant of I love you (Ich liebe dich). Don’t say something you don’t mean because Germans take these things seriously!

Thank you for reading this article. Please leave your feedback in the comments section. There’s lots more where this came from. You can check out this hilarious list of Kosenamen (nicknames) for further inspiration!